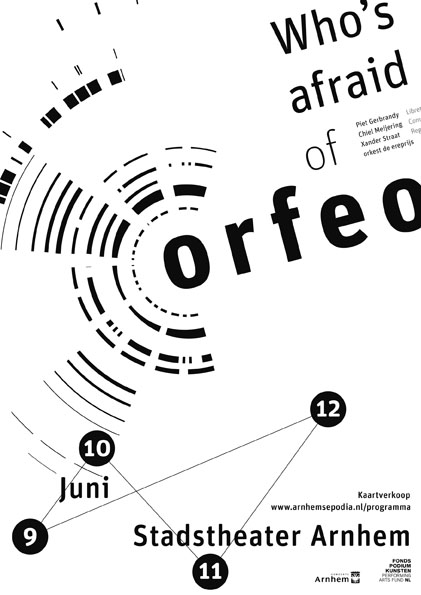 Power and control may be vital to keep society running. Especially when she is under threat of terrorism. But how far can you go in restricting freedom before rebellion arises? We are being watched wherever we go, but who controls our governments? Julian Assange and Edward Snowden have shown us so many things that our  democratic structures cannot grasp anymore. But would absolute transparancy be such a good idea?

In Who’s Afraid Of Orfeo, composer Chiel Meijering and poet Piet Gerbrandy show us in dramatic fashion the insoluble nature of such dilemmas. This opera for six voices has the form of an ancient tragedy, fashioned after Claudio Monteverdi’s 17th-century genre. Orpheus - poet, dreamer, lover – wants to uncover the dubious means by which dictator Dis (Hades) enacts his power. Proserpina, loyal to Dis’ Institute, triest o prevent the actions of her lover Orpheus. In the meantime, Dis takes his own measures. The complicated events come together in a gruesome plot. In between the acts, poetic choruses comment on the story. They suggest that we haven’t grown any smarter since the time of Aeschylus and Euripides.

*= assignment by ereprijs, made possible by het fonds podiumkunsten