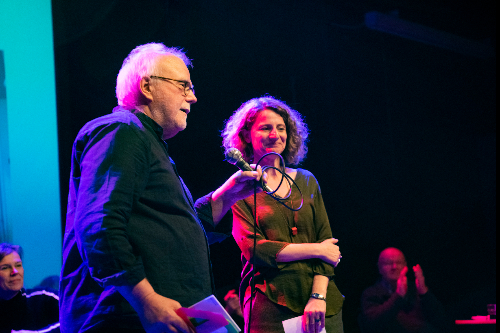 She will follow up Wim Boerman who will step back after 40 years.

The orchestra found a visionary composer/musician in Aspasia Nasopoulou with a strong musical heart. She wants to accelerate the efforts in talent development and go fast forward with new repertoire. The orchestra is impressed by her enthusiasm and ideas for the future!

About Aspasia Nasopoulou
Aspasia Nasopoulou (Athens, 1972) studied piano and composition in Piraeus, Athens and Amsterdam. As a composer and organizer, she frequently collaborated with musicians, dancers, poets and artists. Her work has been performed at home and abroad by ensembles and soloists such as Ralph van Raat, DoelenKwartet, Wishful Singing, Bram van Sambeek, Concord Ensemble (Dublin) and Alma Mahler Sinfonietta (Italy).

As of 2016, Aspasia is curator of Composer's Treat, an artist-in-residence program for composers, part of Cultureland. Together with clarinettist Fie Schouten, she programs Nieuwe Noten Amsterdam, a concert series for contemporary chamber music in the Plein Theater in Amsterdam.

Board member Mayke Nas about the appointment of Aspasia Nasopoulou: “In Aspasia, de ereprijs finds not only a sensitive composer, but also a creative spirit and organizer who has enticing ambitious plans to further grow the important role that de ereprijs plays in the field of new music."