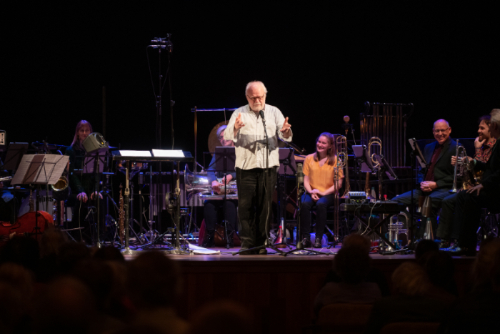 That was it. Just over 40 years and all with great pleasure. It is still a great pleasure, but a number of incidentals prompted the passing of the baton. With many thanks to all members and ex-members of de ereprijs, because without their constant energy and commitment it would never have been possible. Naturally, this also applies to the various board members, who have helped to lay and maintain the foundation for all activities. Not to forget in this context the various politicians, both locally and especially regionally and the associated authorities.

But the core business was and is music, current music. My big thanks to all the composers who have embarked on the adventure with de ereprijs in the past decades.

The makers, therefore, not only of new music, but also from other disciplines such as theater / drama, dance and film to visual art. In that context, I am also indebted to many leaders of theaters, companies, training institutes, not to mention the music teachers in secondary schools in the ereprijs-composition project.

December 20 is my last activity as artistic director of the orkest de ereprijs. In these times we can’t do drinks with snacks and that kind of social affairs, but just two performances of the same program in Orpheus in Apeldoorn. Perhaps in the course of spring there will be the possibility to organize a party, a social gathering, a farewell reception and we will inform and invite everyone about this. As far as de ereprijs is concerned, the artistic direction will be in the hands of Aspasia Nasopoulou from 2021. I wish her and the team, board and members of the orkest de ereprijs all the best and hope to hear some incredibly interesting and a lot of new music, partly through them, in the near future.