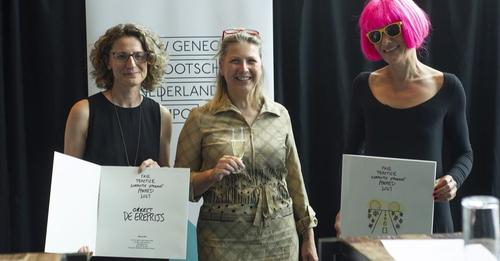 On September 10, 2021, Nieuw Geneco presented the second Fair Practice Award Composition Commission to two winners: Orkest De Ereprijs and patron Marcia (Zembla Music / Support the Composer). Both have been awarded for their unbridled commitment to fair remuneration for composers and for their contribution to sustainability in new music: they ensure that new work remains in the spotlight even after its premiere.

The award ceremony took place during the Gaudeamus Muziekweek in Utrecht. Aspasia Nasopoulou received the prize as artistic director on behalf of Orkest De Ereprijs.

The jury about Orkest De Ereprijs
"The new artistic direction of Orkest De Ereprijs has taken up the work with dedication and dedication. The orchestra assigns many commissions and always thinks of a fair remuneration for the composer. The pieces are often played after the premiere, also five or ten years later. This ensemble is all about quality, young and old, and inclusivity. The Young Composers Meeting organized by the orchestra has enormous significance for international composers, including young people."