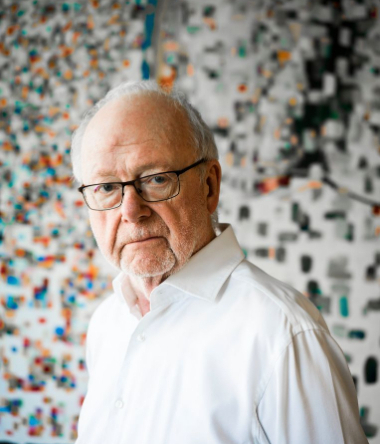 On Thursday July 1, Louis Andriessen, one of the most influential Dutch composers, passed away at the age of 82. He had been suffering from Alzheimer's disease for some time.

Our deepest condolences go out to his wife, family and friends.

As a composer, Andriessen has penetratingly renewed both form and content of our contemporary musical world. He inspired countless young composers to find their own voice in that world. He meant a lot to Orkest De Ereprijs. He supported all initiatives with which new music could be performed. As a senior composer, Andriessen was involved for 19 years during the Young Composers Meeting, in which he coached and inspired more than 250 young composers as an open and curious mentor.

We are deeply grateful to him for all his inspiration, influence and support.


De Staat
"The minimalist composition De Staat marked his international breakthrough at the end of the 1970s. He wrote the piece as a contribution to the debate about the relationship between music and politics. In 1977 Andriessen received both the Matthijs Vermeulen Prize and the first prize of the International Rostrum of Composers." - NOS